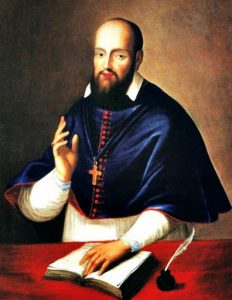 St. Francis of Sales was born in the Savoy region of France in 1567. He studied philosophy and theology in Paris and earned a degree in civil and ecclesiastical law at Padua. After his priestly ordination, he offered his services to the bishop as a missionary to bring the Calvinists of the Chablais region back to the Catholic faith. He was made bishop of Geneva, though he had to reside at Annecy, and was zealous in preaching and putting into effect the reforms of the Council of Trent. Together with St. Jane de Chantal, he founded and directed the Order of the Visitation.

Endowed with a noble, penetrating spirit and well versed in learned humanism, he was an excellent spiritual director. In writing the Introduction to the Devout Life, he opened up the paths of sanctity and asceticism to everyone by showing that the essence of the spiritual life lies in the love of God. In his Treatise of the Love of God, he developed this thought into a simple spirituality which could be called an “incarnational” spirituality, finding God in the daily ordinary things of every day, and serving God alone even in the smallest, most mundane tasks we must perform.

This ability to bring God into daily life that attracted Don Bosco to his spirituality. Don Bosco was also impressed with St. Francis de Sales’ tireless efforts to spread an understanding of the Catholic faith, reading that Francis had even stayed up late at night writing multiple copies of papers to explain the teachings of the Catholic Church.; He then went house to house, placing these tracts under the doors of the people in his diocese. Don Bosco took inspiration from St. Francis of Sales’s apostolate, from his kindly goodness, from his humanity and wanted him as the patron of the Salesian Society. Don Bosco desired that his Salesians would use this same gentleness in dealing with young people.