“OUR LADY WILL BE OUR TRUE SUPERIOR, AND I WILL BE HER VICAR.” 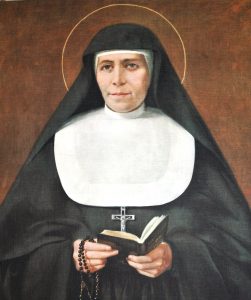 St. Mary Domenica Mazzarello, together with St. John Bosco, co-founded the Institute of the Daughters of Mary Help of Christians

Mary Domenica was born into a peasant farming family May 9, 1837 in Mornese (Italy). Gifted with uncommon good health and physical strength, she worked in the fields and vineyards with her father Joseph. At home she helped her mother Maddalena run the house and take care of the children. Her parents formed her to a profound sense of God, an upright conscience, a marked practical sense, and depth of judgment.

In 1855 she joined the Pious Union of the Daughters of Mary Immaculate, which aimed to bring God back to home and state and promote love for the Church and the Pope through the good example of frequenting the Sacraments, loving Christ in His Passion, and being tenderly devoted to the Blessed Virgin Mary.

In 1860 the town of Mornese was struck by typhoid fever. Fr. Domenico Pestarino, Mary’s confessor, suggested that she take care of relatives who were very ill with the fever. Mary accepted, although she knew that she herself would become a victim. Seriously ill from the disease, she recovered, losing the physical strength that she enjoyed before. She was no longer able to do farm work. Later, in a mysterious vision, she saw a large building with lots of girls running around in a playground, and heard a voice saying to her: “I entrust them to you.”

No longer able to work in the fields, under Divine Inspiration she determined to learn the skill of a dressmaker. She involved her friend Petronilla in her project to teach poor girls not only to sew, but also and above all to know how to love God. Together they opened a sewing workroom for the education of the girls of the town.

In 1862 Don Pestarino met with Saint John Bosco. Moved by the work Don Bosco was doing for abandoned boys, he became a Salesian priest. Through Don Pestarino who had spoken to him of the Daughters of Mary Immaculate, Don Bosco sent Mary and Petronilla a note which changed their lives and the way they did things: “Pray certainly, but do as much good as you can, especially to the young, and do all you can to prevent sin.”

A little while later circumstances led Mary and Petronilla to establish a hospice for two little girls without a stable family. She and Petronilla cared for them like tender mothers. When Mardi Gras and Carnival loomed on the calendar, with Don Bosco’s exhortation in mind, Mary devised celebratory Sunday gatherings at her workroom for the girls of the town. During the month of May besides honoring Our Lady, Mary started a Sunday “festive oratory” (Youth Group) with games and fun, catechism, prayer and Adoration of the Blessed Sacrament. The girls enjoyed these gatherings so much they thought of “nothing else but Sunday the whole week through and became better behaved and pious.”

In 1864 on the occasion of an autumn excursion Don Bosco arrived in Mornese from Turin with 100 boys. He approved Fr. Pestarino’s plan to open a school for the boys of the town and of the surrounding areas. On that occasion, Mary Domenica perceived that she was in the presence of a saint and said: “Don Bosco is a saint, and I feel it.”

THE INSTITUTE OF THE DAUGHTERS OF MARY HELP OF CHRISTIANS

Pope Pius IX encouraged Don Bosco to do for girls what he was doing for boys. For years Don Bosco had been pondering in his heart the project of founding a female institute that could parallel his work for boys. With the wise collaboration of Don Pestarino, he chose the first foundation stones of the future Institute from among the Daughters of the Immaculate. They would live in the newly built school in Mornese.

On August 5, 1872 the first eleven young women made their religious profession in the hands of the Bishop of Acqui, Bishop Giuseppe Sciandra, in the presence of Don Bosco. The Institute, called Daughters of Mary Help of Christians, grew rapidly. Sister Mary Mazzarello as the Superior proved to be a skilled formator and teacher of the spiritual life. She had the gift of discernment, a strong educational ability, serene and reassuring cheerfulness, and the art of involving other young women in the commitment to dedicate themselves to the promotion of young women so that they could be good Christians and honest citizens in the family, in the Church, and in society.

In 1877, sharing the missionary ardor of the Salesian confreres, six FMA left for the missions and founded the first house in Uruguay, which in a year’s time was followed by the establishment of houses in Argentina.

In 1879 the Motherhouse was transferred from Mornese to Nizza Monferrato, which was more geographically accessible than Mornese.